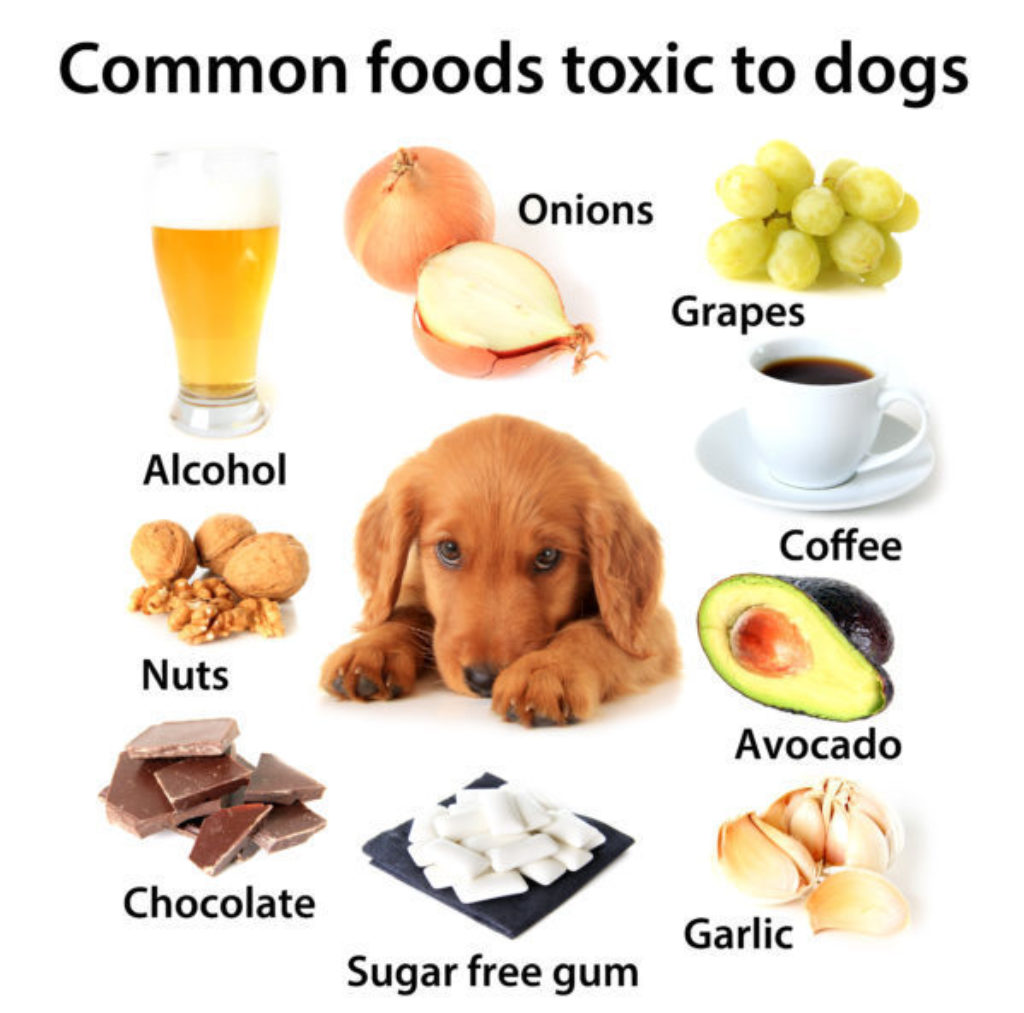 By now most people know that certain foods are not safe for our animals. For example, chocolate for dogs has the main ingredient theobromine, which causes cardiac abnormalities. The richer the chocolate, the higher the levels of theobromine.

So put down those truffles and lock them up. Grapes and raisins are also no good for our canine friends as they can cause acute renal failure and death. We don’t know the mechanism but in some dogs it may take as little as a few to cause problems. Other well-known toxic agents are alcohol, avocado, macadamia nuts, and numerous household medications.

…put down those truffles and lock them up…

That sugar free chewing gum looks good and may be good for your teeth but it’s definitely not good for your dog. A lot of sugar free products contain Xylitol. Small quantities can be good, antimicrobial properties against oral bacteria; a low glycemic index; and other advantages to human health.

But certain quantities can be very harmful to our pets. In dogs, doses of xylitol induce an exaggerated insulin release that is 3-7 times that caused by equal amounts of sugar, and results in low blood sugar.

The exact mechanism of the liver injury that sometimes occurs in dogs with ingestion of large amounts of xylitol is not well understood.  But this injury may be permanent and irreversible. The safest thing to do is keep all Xylitol products away from your dog so as to avoid incidental ingestion.

The exact mechanism of the liver injury from ingesting of large amounts of xylitol is not well understood.

Also in the news lately is blue algae. There have several reported deaths of dogs. Toxic blue-green algae are not actually algae but a toxic microorganism called cyanobacteria that contain chlorophyll. The bacteria can cause skin irritations and gastrointestinal problems in humans.

In animals, exposure can cause death in as little as 15 minutes. The bacteria are more common in warmer climates but has recently been seen in more northern climates. The algae tends to be in more stagnant water areas such as ponds. Some water authorities have started to identify when the algae are present to alert people not to swim in the water.

…In animals, exposure can cause death in as little as 15 minutes.

Another backyard friend that may cause problems is acorns. Mostly they will cause gastrointestinal problems, but in high enough levels kidney disease can be the result.

Here are some things we need to be aware of as we are coming up on the holidays.

Thanksgiving is not only a day we spend with our families it is also a big time for our pets to be fed by our guests, or when our critters love to get in that garbage and feast. Bones can cause serious problems as well as those fattening meals which can trigger vomiting, diarrhea, or even pancreatitis.

Right after that is Christmas. For some reason our 4-legged friends find those ornaments and that tinsel so much fun. At least once a year we have a canine friend that tries to eat a glass ornament and our feline friend try to chew on that tinsel. I would say pass on the tinsel and keep the dogs out of the room with our trees.

Cats React to Everything

When it comes to cats, well they react to everything. Aspirin products can cause death in cats and so no Tylenol, Advil or any NSAID products unless approved for cats. There is a long list of household plants that are toxic to cats. One I remember well is the Lily of the Valley, or any lilies. During Easter many people get lilies as gifts. In our feline households we say skip it. You can go to   American Veterinary Medicine Association or American Society for the Prevention of Cruelty to Animals for a full list of plants.